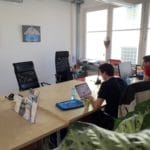 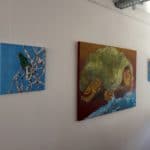 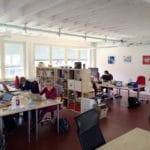 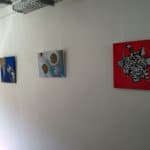 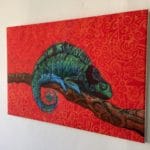 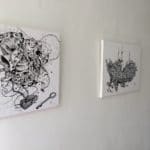 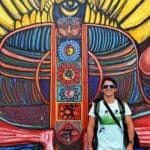 Where and when were you born?

What is your educational background?

I studied Civil Engineering from the University of Puerto Rico until 2010. After graduation I worked for 2 years in a construction company in Puerto Rico and and since 2012 I’ve been living in Stuttgart Germany, where I pursued a Masters of Engineering in International Project Management at Hochschule fur Technik Stuttgart. I also lived a couple of months in Liverpool in 2014 where I obtained an MBA from Liverpool John Moores University.

What education or training do you have in the field of arts?

My training as been mainly self taught, with some courses „here and there“ . I learned about the use of shadows, realism and perspective for some time with renowned Puerto Rican painter Andy Bueso, when I was around 13 years old. I also took courses offered by different Puerto Rican cartoonists throughout the years and later in college during my engineering studies I also took drawing, acrylic painting, and art appreciation courses.

What are your hobbies?

When did you started drawing?

I do not know exactly, I just know that it’s something I have always enjoyed as a hobby throughout my life, with a different intensity through different phases of my life. My foundation was caricature type of drawing. Since early childhood, I was fascinated with the 90’s animated movies of Walt Disney and later with comics of Stan Lee. My grandmother used to draw and had given some courses, and I remember she gave me a whole bunch of books as a young kid about learning how to draw, so I practiced day and night for many months trying to get the drawings exactly as in the books thinking that by just doing that I would become as good as the book author. This sparkled my interest into copying in drawing popular cartoons. I was mainly impressed in how these cartoonists could take a person, animal, object and simplify it in drawing as much as possible while still keeping the identify and essence of the object. Also in how these artists were able to identify and capture the most excelling features of a subject and make them visually appealing. At school and in my neighborhood I had friends who had drawing skills also, which was a good thing because it motivated me to keep up with their level and keep practicing. As I grew older, I drew less and less, up until almost nothing for a couple of years during my college years. I started drawing again after I graduated from my bachelor and started working as a project engineer. In a way the technical nature of the job led me to see drawing as a way to satisfy that craving of doing something creatively demanding which I couldn’t find in my job and engineering studies at the time. It became more serious after doing my first sell of a painting I had done a long time ago, in a moment I was looking for ways to fund my postgraduate studies. That was the moment I decided to take it a „bit more serious“.

How would you describe your style?

Colorful, fun and spontaneous. People that know more about art appreciation have said that my style tend towards a surrealism movement, but even though I took an art appreciation course in college, I must say that my knowledge about artistic styles is limited.

The process I follow for my drawings is based on not trying to think about what I am going to draw and bringing some sense to what may initially look chaotic… and is based on a technique I learned in an architecture summer camp, where we had to initially draw something with our eyes closed and later fill up the spaces left in between the lines with figures and shapes. I then later use shadows and color to stand out figures and shapes that I see hidden between the many lines.

What materials do you use?

I mainly use indian ink and posca markers. Lately I have been exploring and mixing my drawings with acrylic painting.

What has influenced your style?

Well, assuming that style is mainly defined by the selection of colors, themes and way of painting, I would say that all of them are related one way or another to my country Puerto Rico. I would say that my selection of colors is influenced by being raised under such a warm, colorful environment found there. The elements and themes I enjoy the most are elements found in nature, plants and animals. This comes from my passion for the sport of surfing, which I developed since a young age living in a country where no matter where you stand you are maximum 40 minutes from a beach. This passion for this sport, led me to spend a lot of time in beaches around Puerto Rico and do surf trips to Nicaragua and Costa Rica, experiences which in turned developed in me a sense of environmental awareness, responsibility and close contact (and respect) with nature and hence an interest in imitating nature in my style. That is why the lack of straight lines, as in nature, is a characteristic found in all the drawings I do.

What you are working on currently (themes, projects, ideas…)?

I’m thinking of creating a series only about native animals of Puerto Rico. Specially of those which are in danger of extinction and those that are maybe not even well known by the majority of Puerto Ricans. I used to work in a non profit organization involved in the rehabilitation of stray dogs, so in the future I would like to create a series of paintings that in some way raises awareness against animal cruelty and abandonment, which is a big problem in Puerto Rico. How or what, I still don’t know.

What do you want to accomplish with your art?

I want to „workout“ the imagination of the spectators and sparkle their own creativity. I want to bring out that funny, colorful and FUN imagination we used to have as kids that for some reason maybe has been lost along the years.